How Power Batteries Can Accelerate Decarbonization

There can be no global shift to renewable energy without better storage technology. New solutions such as Battery Energy Storage Systems (BESS) are emerging in the region to help build the business case for coupling this technology with renewables.
Raúl Sánchez
Joan Miquel Carrillo
JULY 27 2022

The use of batteries to store the excess energy generated from clean, intermittent sources is the obvious solution. But the development of these technologies has lagged that of renewable power generation, until now. The growth of Battery Energy Storage Systems (BESS) can change that equation.

BESS allow for smarter capture and release of energy from different sources. They can provide frequency regulation on a minute-by-minute basis to the grid, helping to keep a safe and stable power supply, among other services. They are becoming a viable solution for integrating variable renewable energy such as wind and solar into electricity systems, taking advantage of the falling cost of lithium-ion batteries over the last decade.

According to Bloomberg New Energy Finance (BNEF), lithium-ion battery pack prices have fallen from above $1,200/kilowatt-hour (KWh) in 2010 to $132/kWh in 2021, an 89% drop in real terms. By 2024, BNEF envisions average prices will be close to $100/kWh. This evolution has mostly been driven by the surge of electric vehicles and economies of scale in industrial production of battery packs. 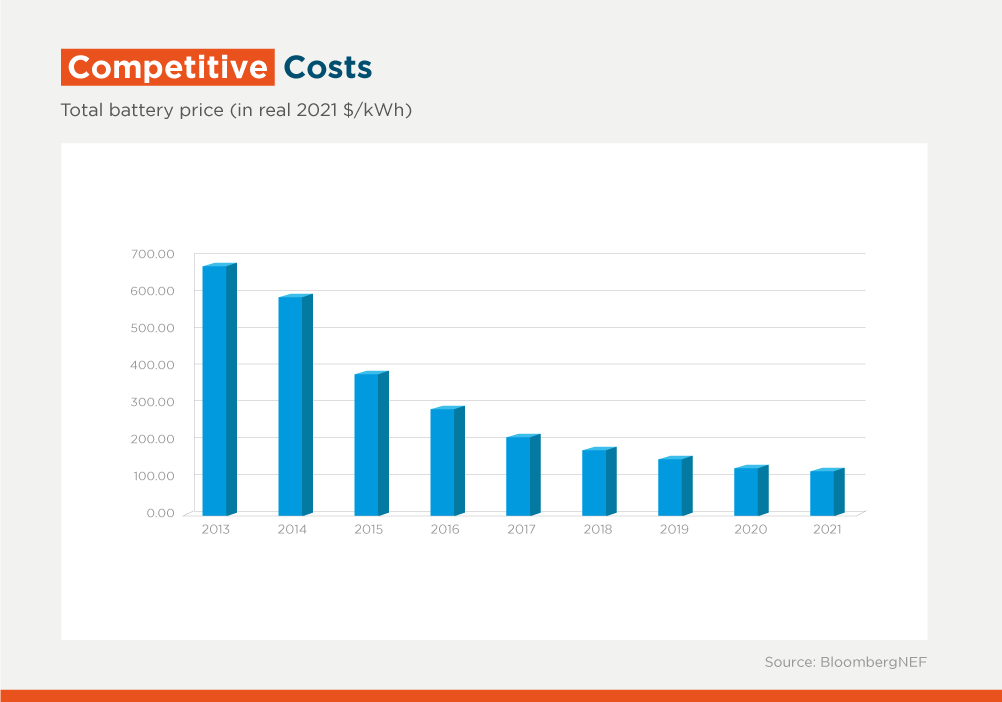 While the use of BESS in renewable energy projects is still incipient around the world, new experiences are emerging to help build the business case for this promising storage technology.

One such case is in El Salvador. As it stands, all electricity generators in the country interconnected to the transmission grid are obligated to provide energy reserves when needed to ensure the grid’s reliability and stability. However, since generators using wind or solar cannot provide this service to the grid on demand, existing regulation requires them to compensate the reserves provided by conventional energy generators, such as hydro and thermal power plants, via the system operator. This implies an increase in costs for companies such as Neoen, which operates two of the country’s main solar plants: Providencia Solar and Capella Solar.

Alternatively, if these solar plants built their own BESS to comply with the grid requirements, they would not need to rely on ramping up and down hydro and thermal power to regulate  frequency on their behalf. If the system is properly designed, Neoen’s current payments for conventional energy  to fill in gaps would be reduced to almost nothing.

BESS also have the added benefit of being more efficient in responding to variability in grid demand vs. hydro or thermal power plants, not to mention that they displace the GHG emissions that would have been generated by conventional power sources in the status quo scenario.

The business case for BESS seems clear, so: why wasn’t commercial financing available for this investment? In a nutshell, existing lenders in both Providencia and Capella Solar were concerned about the risks of financing technology with a limited track record. That’s why in 2021, IDB Invest, which had previously invested in both projects, provided long-term debt to finance BESS for the two solar plants, using blended finance resources from the Canadian Climate Fund for the Private Sector of the Americas Phase II (C2F2).

The type of debt provided in this deal is novel in the realm of battery storage in Latin America, as the borrower is entitled to defer repayment when the expected savings are not met. In other words, it is a sort of “pay-as-you-save” financing where repayment of principal is dependent on actual performance of the BESS.

In March 2022, Neoen was awarded the Latam Battery Storage Deal of the Year 2021 by IJ Global. Innovative financing solutions like this are needed to boost the commercial viability of battery storage projects and accelerate the energy transition in the region. After all, deployment of energy storage will be a key enabler of the global energy  transition required for significant climate change mitigation and for ensuring the security and reliability of future renewable energy-based grids.

Raúl Sánchez is a Development Effectiveness officer for the IDB Invest Strategy and Development Department. He is in charge of developing impact as

Joan Miquel is a Blended Finance Lead Investment Officer in the Financial Products and Services Division at IDB Invest and is based in Washington DC.