The Role of Men in Gender Equity and Inclusion

Recent studies show that telework during the pandemic underlined the place of traditional roles regarding the corporate gender gap in the region. Men have a specific responsibility in bridging that gap.
Stephanie Oueda
Gary Barker
FEBRUARY 08 2022

A recent focus group survey among employees of 57 companies in Latin America and the Caribbean (LAC) shows that almost 50% of men believe that male employees should play an active role in the fight for gender equity. The question is what kind of role we are talking about.

Although gender equality in the region is advancing, gaps persist. According to the study, which results can be found in the IDB Invest report prepared in collaboration with Promundo-US and Mercer, "Equality Needs Everyone: The Role of Men in Equity, Diversity and Inclusion," 72% of women say they "sometimes", "frequently" or "always" face career development issues. Only 28% answer "never" or "don't know".

These gaps are diverse. Some are the so-called traditional gaps: i.e., the reluctance of many companies to hire women for jobs that are perceived as typically male in sectors such as construction or agribusiness. Others relate to the relatively low percentage of women studying science, technology, engineering and mathematics (STEM).

Other gaps are much more recent and pandemic-related. Particularly during the COVID-19 lockdowns, the experiences of men and women have been very different. For example, 96.7% of the 239 respondents consider that, compared to men, women have more responsibilities at home and in caring for children, and elderly or sick relatives while teleworking.

Only 3.3% of all respondents stated that the experiences of men and women during telework are similar. This is an extraordinarily low figure, indicating that a major factor underlying the gap is the perception of each gender’s role. This places a special responsibility on the male gender and the specific actions that each employee can take in their day-to-day working life.

The business rationale for reducing the gender gap is well known. Several studies have shown that a higher percentage of women in the workforce and, in particular, in top positions correlate with better outcomes and a greater ability to attract and retain talented professionals. What has not been so evident, at least until now, is the business rationale for including men as allies in equity initiatives.

Eight out of ten people working in the private sector in LAC attest to the fact that men play an active, supportive or similar role to that of women in terms of gender equality initiatives, meaning that men are indeed allies. A study by IDB Invest, Mercer and Promundo (2020) found that companies consider that male involvement is vital for different reasons.

For example, gender equality in business results in less pressure on men as sole source of income. With greater access and participation of women in the labor market, household income increases and men no longer feel they are the sole or primary breadwinner. Improved family relationships and the so-called work-life balance are also key. Men who take on more caregiving roles tend to build closer relationships and are more likely to have better physical and mental health, while their female partners experience higher satisfaction levels and lower tension in the couple.

In the workplace, eliminating discriminatory behaviors allows men to enjoy trusting and respectful relationships with women and other men, while promoting greater collaboration and reducing the tendency to create silos.

Eliminating such behaviors requires that men play an active role in the business. As top management positions are traditionally occupied by men, many of the efforts needed at the corporate level (breaking down barriers, affording equal pay, including women-led companies in value chains and supplier or customer portfolios, etc.) would deliver better outcomes if men took an active role. 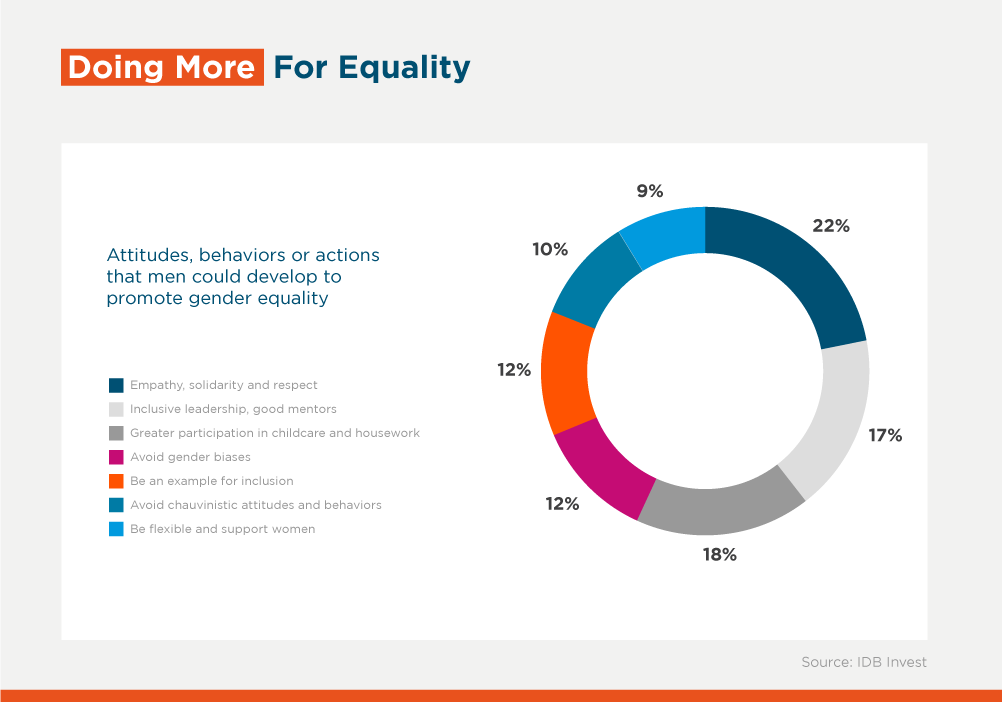 It is important to recognize the privilege and influence of men in the corporate world, as evidenced by the leadership positions they hold. Becoming aware of these advantages will help them assume a new responsibility and change the structures and systems that create inequality and exclusion through initiatives to promote labor equity in companies.

Only then can men question their own unconscious biases, empathize with the challenges faced by their female colleagues, participate in mentoring programs, and join equity committees, among other initiatives. As equality allies, they can understand and prevent the harms caused by discriminatory work cultures, accelerate progress and benefit from more equitable workplaces.

This requires mobilizing to change the leadership roles both in the business and personal life. Gender equity is not just a women's issue.

Gary Barker, PhD, is a leading global voice in engaging men and boys in advancing gender equality and positive masculinities. He is the CEO and co-fou