We present three selected IDB Group blog entries, on the need for a fiscal strategy for the region to emerge from the coronavirus crisis, the cost of crime in El Salvador and the importance of exports
Idb Invest Team
APRIL 16 2021

Even before the COVID-19 crisis, Latin America and the Caribbean faced stagnant growth. GDP, however, fell by 7.4% in 2020, and the region’s public finances were hit hard. With tax collection dropping 25% (and bouncing back only partially), and spending rising by about 3.5% of GDP as governments sought to attend to health and preservation policies to save households, jobs, and firms, the average fiscal deficit rose to about 9% of GDP in 2020, way above pre-crisis levels of 3%. IDB projections suggest that average debt may ascend to almost 80% of GDP by the end of 2022, a frightening rise from its pre-crisis average of 58%.

Fiscal sustainability is clearly at stake and fiscal reform, including significant changes in tax and spending policies, are urgently needed. They are essential to reversing fiscal deterioration, promoting growth, enhancing equity, and preventing the next fiscal crisis. How is the region going to tackle these reforms? What is the likelihood that this dramatic deterioration will be reversed? And which are the right tools to get the job done?

As activity recovers, tax collection will likely recoup as well. However, governments will not necessarily revert to previous spending levels. For comparison, consider public spending behavior in the region in response to the Great Recession of 2008-2009 and beyond. Supposedly countercyclical policies ended up with large increases in public expenditure. These included, most significantly, salaries and transfers that proved quite difficult or even impossible to undo. As a matter of fact, those two components represented, on average, almost two-thirds of the expansion, and they were the seed of fiscal imbalances that persist today. 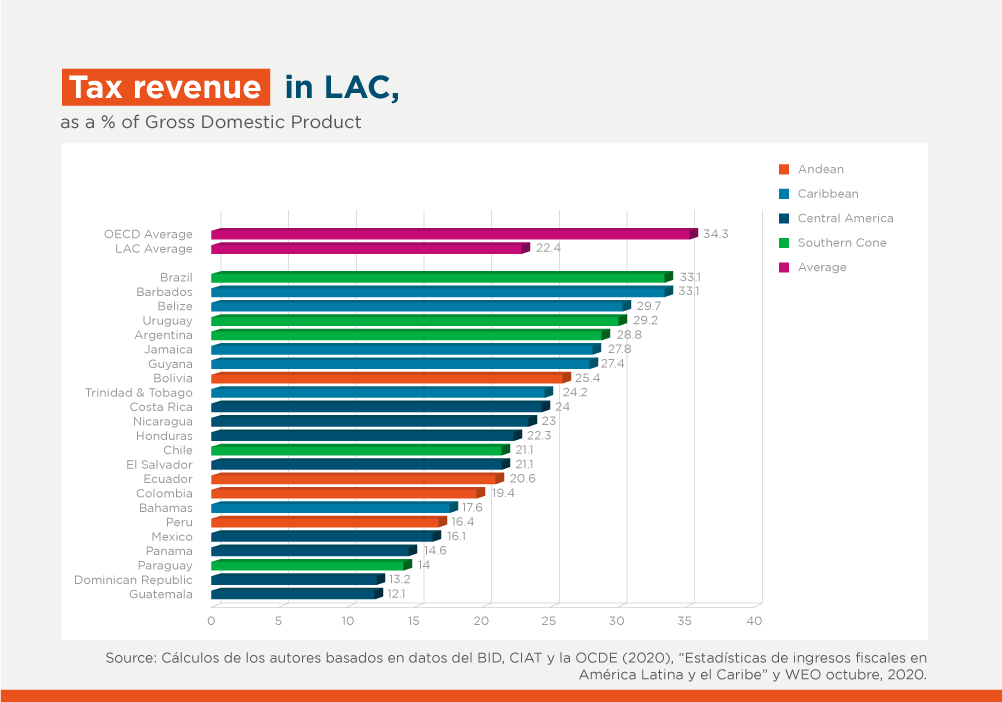 The socioeconomic costs of crime and violence in El Salvador have been the object of study since the 1990s. In recent years, estimates of the monetary cost imposed by crime and violence suggest a significant impact of between 1/6 and 1/5 of the country's economic output. However, the effects on the business fabric have not been explored in depth, and therefore there are important questions that remain unanswered. For example, how does crime affect micro and small companies? Is this an important limitation for the growth of these companies? These are some of the questions we explore below.

The high crime rate in El Salvador (254 crimes per 100,000 inhabitants in 2020, which includes robbery, extortion and other crimes) not only causes a disturbance to economic activity, but the deterioration in the business climate also hurts planned investment, growth and business development. Armed robberies and extortion are common, and constitute the gangs' main sources of income.

In the current situation, the impact of the pandemic, mainly due to the containment measures implemented, many companies were forced to temporarily close their operations, so it was expected that the criminal activity directed towards them would decrease. Data from the National Civil Police (PNC) reflect that during the months of March to June 2020, extortion, robbery and theft decreased by 55% compared to the same period in 2019 and by 49% in contrast to 2018. According to the Office of the Attorney General of the Republic (FGR), extortion continued, although a smaller number of victims presented their complaints due to restrictions on mobility. As of July, it is observed that these crimes begin to return to levels similar to those in previous years. Since the beginning of 2019, the only type of crime that has shown a sharp decline is homicides, which had already halved between 2015 and 2018.

Why Latin America should export its way out of the crisis

In mid-2020, at the height of the first wave of COVID-19 infections, the IDB argued that the pandemic had particularly devastating economic effects on Latin America and the Caribbean because it had slammed the brakes on three flows that are fundamental to development: finances, people, and goods. This is what economists call a triple sudden stop.

How is 2021 shaping up in these three areas? In this post, I argue that, although there are grounds for optimism and caution in each, the region cannot afford to pursue a way out of the crisis that does not place export development at the heart of its strategy.

On the financial front, there are signs that restrictions around the world are easing. According to a Financial Times study using data from the Institute of International Finance, in the first few weeks of the year, investors seeking high returns seem to have returned rapidly to emerging market economies as a result of massive liquidity injections from central banks. However, growing risks of inflation in advanced economies, the possibility of normalizing their monetary policies, and market overreactions are some of the factors suggesting caution. The question also remains as to how far Latin America will benefit from wagering on emerging economies and how investors will assess the region’s macroeconomic risks in the coming months.