Why is there growing demand for Central American cocoa?

In pre-Columbian times, cocoa was a commodity so valuable it was used as a currency. In Mesoamerica, where it has been consumed for millennia, the Aztecs paid for everyday items in cocoa beans. Three would buy you a turkey egg, one hundred a whole hen.

How cattle ranchers can profit from planting trees

In agriculture it’s not often that you find a relatively simple way to increase production by up to 20%. Planting trees turns out to be one such way for cattle farmers. Cows like shade and grow much faster if they graze on pastures dotted with trees. Studies show that combining livestock herding and forestry on the same stretch of land can lead to an 8% to 20% increase in dairy and meat production in the Southern Cone region. 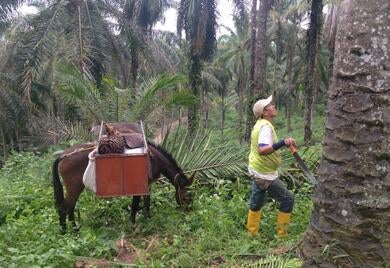 What do soap, Ben and Jerry’s, and KitKat bars have in common? They all contain palm oil, an oil produced by the oil palm tree. Indonesia and Malaysia produce the vast majority of the world’s supply and have experienced significant environmental consequences as a result. Now the crop’s profitability is attracting interest in other tropical climates, including Latin America and the Caribbean.

Six Takeaways on the Growth of Palm Oil in Latin America

As I have noted before in this space, there are a number of risks and opportunities associated with palm oil. Among other negative impacts, expansion of palm oil plantations drives deforestation in many tropical countries, resulting in enormous carbon emissions. However, palm oil’s high productivity makes it a profitable investment and it has the potential to bring wealth and employment to rural areas.

Is Investment in Palm Oil Certification Worth It?

Palm oil has a terrible reputation. Especially among environmental and social advocates, palm oil is viewed as the crop responsible for a large-scale deforestation, particularly in Southeast Asia. Deforestation of carbon-rich forests leads to greenhouse gas emissions; between 2001 and 2010, palm oil-driven land-use change resulted in an average of 216-268 million tons of CO2 equivalent per year in Indonesia alone. For some perspective, that’s equivalent to the emissions from driving more than 45 million cars over the course of a year! Evidence also suggests labor rights violations, including child labor, at many plantations.