Based on the IDB Group’s track record with supporting women’s economic empowerment, here are four overarching lessons with a focus on private sector initiatives. Some may seem obvious at first glance, but there are still many institutions, both public and private, that don’t consider women´s particular needs.
Isabel Berdeja
Galia Rabchinsky
OCTOBER 21 2021

It is clear that the pandemic has had a disproportionate impact on women’s lives and livelihoods.  Women’s jobs are nearly twice as vulnerable to the crisis as men’s, and this is especially the case in Latin America and the Caribbean (LAC).

Women in the region are at greater risk of leaving the labor market altogether, due to a slow economic recovery plus increased household and caregiving responsibilities, ingrained gender bias, and limited access to support services, such as day care. It doesn’t have to be this way. The pandemic has put a spotlight on gender equality as never before, offering an immense opportunity for the region to remake how it supports the equal participation of women in economic life.

As we chart this path forward, it is helpful to learn from what has (and hasn’t) worked in the past when it comes to support for women’s economic empowerment (WEE). From 2016 to 2020, the IDB Group supported 2.34 million women as participants of economic empowerment initiatives. The 2021 Development Effectiveness Overview (DEO), the IDB Group’s flagship report on its results and impact, includes a chapter distilling the main lessons learned from its work supporting WEE across the region. 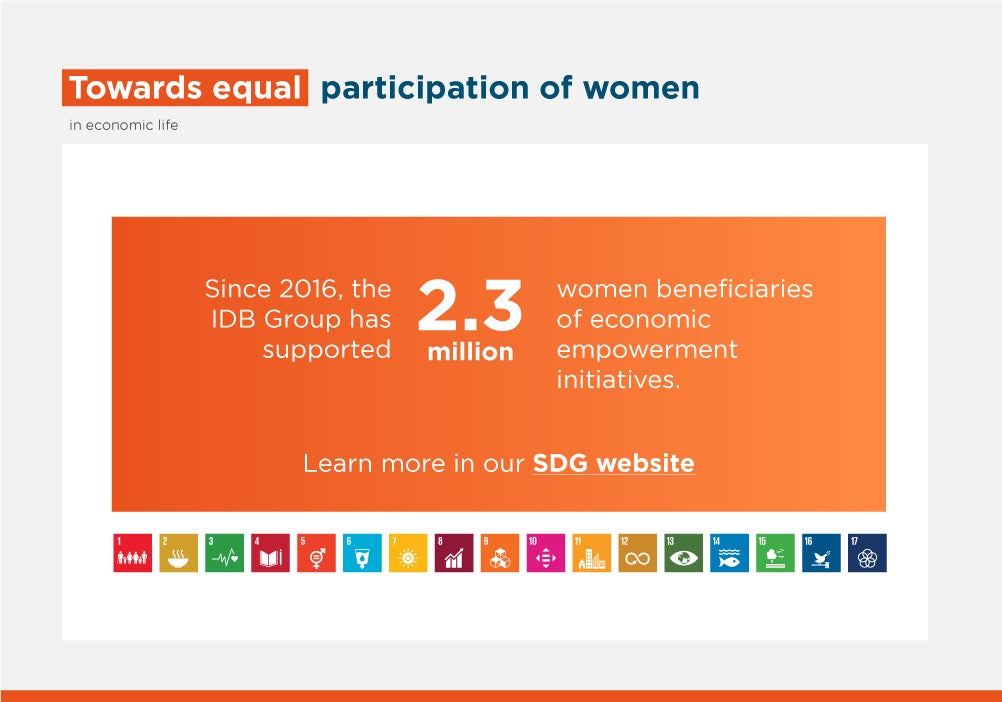 This post highlights four overarching lessons from this review, with a focus on private sector initiatives.  While some lessons may seem obvious at first glance, there are still many institutions in the region, both public and private, that don’t consider women´s particular needs when developing their interventions.

Lesson 1: Strengthening WEE requires first understanding women’s needs. It’s important to have quality, sex-disaggregated data on women’s needs and gender gaps for both designing successful interventions and tracking their performance, a practice that is still scarce in the region.

For example, in an IDB Invest project with a bank in Costa Rica, the client did not track the performance of its loans to women-owned/led micro, small or medium-sized enterprises (WMSMEs). This made it difficult to understand the overall impact and profitability of this targeted loan portfolio.  Today, with the fast-growing market for WMSME portfolios and thematic bonds, including gender bonds, it is becoming increasingly important for financial institutions to collect sex-disaggregated data.

Lesson 2: WEE initiatives should utilize tailored approaches. Since women tend to have different needs, attitudes, barriers, and preferences than men, failure to tailor approaches can perpetuate inequalities and may put at risk intended development results. Take women’s access to finance, for instance. Many women lack a formal credit history and collateral which prevent them from accessing credit. Our experience from private sector projects shows that low-cost alternative credit scoring approaches are a viable way to evaluate a potential borrower’s ability and willingness to repay loans.

For example, in an IDB Lab operation with a bank in Peru, we used a psychometric tool as a supplementary risk analysis methodology to assess the creditworthiness of MSMEs (about half of which were women-led) that would have otherwise not met the bank’s minimum requirements. The results show that the tool was especially effective at helping MSMEs without a credit history increase loan access without worsening the bank’s portfolio-wide repayment trends.

Lesson 3: Increasing women’s workforce participation requires breaking down structural and cultural barriers. Barriers posed by workplace culture, gender bias, and access to safe spaces continue to prevent women from accessing stable, formal, high-quality, full-time jobs. This situation is even more pronounced in sectors where women are traditionally underrepresented, such as energy and construction. That’s why efforts to promote WEE should actively aim to offset these structural barriers by offering affordable childcare or greater work flexibility, for instance.

For example, IDB Invest, together with a bank in Guatemala, found that some of the bank’s policies and procedures did not support the inclusion of female employees. As a result, the bank improved its work flexibility policies, adapted infrastructure for nursing mothers, and implemented a leadership development program for female executives.

We have also learned that pairing advisory support to clients with financial incentives can provide the spark needed for companies to take action. For example, using blended finance resources, we offer gender-based performance incentives. This means the interest rate of a loan is reduced upon the completion of predefined milestones, such as an increase in the number of women hired in non-traditional roles. Over 80% of the companies we have tried this approach with have effectively had their interest rate reduced by meeting their gender targets.

Lesson 4: Having women in decision-making roles helps to empower other women. Simply put, representation—from the halls of government to the boardroom—matters. However, women continue to be underrepresented in positions of influence in LAC, even though they improve companies’ business performance.

For example, access to capital continues to be the main challenge facing women-owned or led startups in the region. An IDB Lab-supported survey of 1,150 women entrepreneurs in the region showed that female founders often lack the right connections to access key investors. Those who are able to access venture capital often do so thanks to connections with other women in the entrepreneurial ecosystem, particularly women on the fund’s investment team or other female entrepreneurs backed by the fund. Investors and development finance institutions can play a key role in promoting the inclusion of more women on fund management teams by explicitly considering a fund’s commitment to gender equality, both at the fund manager level and within investee companies.

Taken together, lessons such as these can help the private sector seize the opportunity to create a more inclusive region where more women opt into the labor market instead of opting out. For more detail, see Chapter 5 of the 2021 DEO.

Isabel is a Gender, Diversity and Inclusion Officer at IDB Invest, where she joined in 2019. Isabel is responsible for designing and executing advi