Greater women participation in the labor market and in the business ecosystem should strategically consider technological development and changes in value chains, to achieve a truly sustainable female economic empowerment within the framework of the Fourth Industrial Revolution.
Daichi Tsuchihashi
Natalia Torres
SEPTEMBER 16 2021

Issues related to gender equity have gradually been incorporated into the trade policies and efforts across Latin America and the Caribbean (LAC). As proof of this movement, a large number of trade promotion organizations have been promoting the internationalization of companies led by women, recognizing the role of gender diversity to generate innovation, competitiveness and inclusive growth.

Over the last decade, this includes the Mujeres Exportadoras Program of the Argentine Investment and Trade Promotion Agency, Mulheres na Exportação of Apex-Brasil, Mujer Exporta of ProChile, Women Export of Procomer, Ella Exporta of PromPerú and WE-Export of Caribbean Export, among others. The same is true of commercial intermediation platforms between women-led companies and corporate buyers, such as ConnectAmericas Mujer of the IDB Group, and WEConnect International.

In the region, however, trade continues to display distributional effects that vary by gender. Women represent a smaller share of export-oriented employment than total employment, although CEPAL has reported this gap to have narrowed over the last two decades. Based on available data for ten South American countries and Mexico, in 2018, 11.8% of women in those countries were engaged in export-related employment, compared with 15% of men. 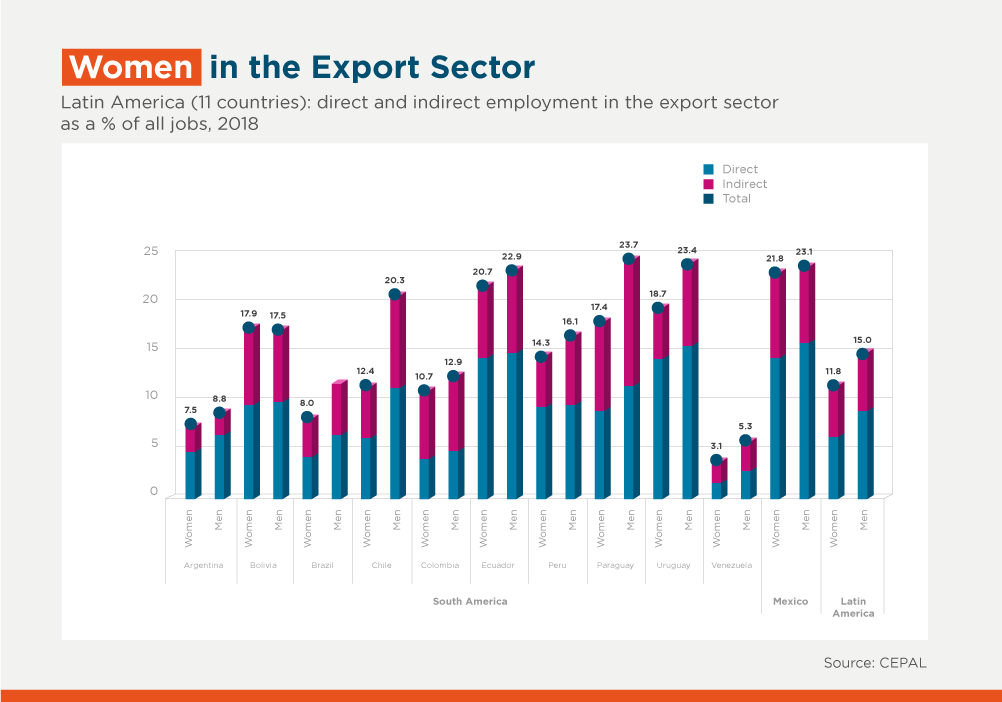 Although the data is insufficient, if we apply the same discrimination dynamics found in the broader labor market to the export segment, it is very likely that trade effects also vary among different groups of women, where some are likely to be at a disadvantage (e.g., racialized women).

Moreover, both from an employment standpoint and from the point of view of female entrepreneurship, women continue to be overrepresented in what are considered to be “soft” sectors—i.e. those that do not require STEM (science, technology, engineering, and mathematics) skills. They are also underrepresented in the so-called “hard” sectors, which tend to be the most competitive, have higher value-added products and services, better profitability, and greater potential to generate stable and quality jobs.

This is what we have learned, for example, from the recently released report by the Institute for the Integration of Latin America and the Caribbean (INTAL), “Unequal Olympics - Gender Equity in Latin American and Caribbean Companies”, which we have already quoted in this post. According to the study, female labor presence strongly predominates (64%) in areas such as Human Resources, Communications, Public Relations, and Social Responsibility and is much lower (35%) in areas such as Foreign Trade, Operations, and Information Technology.

Similarly, in the field of entrepreneurship, according to WEConnect International, women-led businesses in LAC are strongly represented in the professional services, advertising, public relations, professional development, food production, and health and care services sectors.

This trend also holds true in the field of academic and professional training. According to the recently published 2021 UNESCO Science Report, women accounted for only a quarter (28%) of higher graduates in engineering and 40% in computer science worldwide. The study also highlights that women make up only 22% of professionals working in the field of artificial intelligence and remain a minority in technical and leadership positions in technology companies.

While all activities must be recognized and valued, digital technologies are seen as critical to future economic competitiveness and, given the accelerated changes in production models brought about by automation processes and artificial intelligence, the underrepresentation of women in the most technological sectors puts them at high risk.

The research conducted by INTAL, with 1,015 companies from 20 countries in the region, has confirmed this virtuous cycle created by the technology, foreign trade, and gender equity triad. The study highlights that, on the one hand, exporting companies are generally more committed to gender pay gap analysis and provide more benefits than non-exporting companies. On the other hand, companies whose workforces are more skilled and use advanced technologies are more gender-equitable than the rest.

Furthermore, diversity and inclusion are proven to be important drivers for driving innovation and collaboration - two key drivers not only for technological disruption, but also for meeting the challenges of post-pandemic economic reconstruction. According to McKinsey, in Latin America, employees of companies committed to diversity are 152% more likely to propose new ideas, 64% more likely to share ideas and best practices, and 77% more likely to state that their organizations apply consistently outside insights to improve your results.

Sustainable Development Goal 8 has driven us in the search for an inclusive economic growth model and by increasing productivity levels and technological innovation, leaving no one behind. In this sense, regional value chains are of relevant importance in the generation of jobs since, in the current global context, regional integration must play a key role in exit strategies from the crisis in LAC.

In this sense, we have to ensure that the distributional impacts of exports and imports benefit men and women. This is achieved through the effective insertion of women in international trade, and promotion of more equal participation of women in strategic sectors with greater innovation, technology and rising returns.

Daichi is IDB Invest's Telecommunications, Media and Technology Investment Officer (TMT). He joined in 2016 and is responsible for the origination and

Natália is an Investment Management Officer for Gender, Diversity & Inclusion at IDB Invest, which she joined in 2020. She is responsible for supporti