Below are three IDB's blog entries about video games and public transport in Latin America and the Caribbean as well as the vaccination pace in the region.
Idb Invest Team
JANUARY 29 2021

PLAY challenge: Video games are not a game

No, video games are not a game. Video games gather 2.3 billion gamers all over the world, 234 million of whom are located in Latin America and the Caribbean (LAC). Moreover, video games attract a versatile massive audience that is comparable to the one created by the TV or the radio when they started broadcasting, with the power of reaching women, men and children of all ages as well as older people, depending on the content.

Video games are the top players of the Orange Economy in terms of growth, even in Latin America, exceeding the expected profit in the music and movie industries considered jointly. In 2020, according to global figures released by Newzoo, this industry recorded profits amounting to $159.3 billion. One of the strongest growing regions was LAC and APAC, with 10.3% and 9.9% growth, respectively, as compared to the revenue for 2019.

Apart from generating millions of dollars worldwide, the gaming industry is responsible for creating 220,000 jobs, with the direct and indirect rippling effect of creating more work opportunities for programmers, 2D and 3D animation artists, and sound engineers, among others.

The industry has also cross-sector impacts, engaging other creative professions, such as music, writing, drawing and production. An iconic example is the USA, where since 2015 there has been an exponential increase in the demand for music composers, which is directly connected to the launch of Apple’s App Store and of Facebook's app development system, which opened up a space for thousands of game developers of all sizes and multiplied the demand for music composers for video games in the country.

For most people in the LAC region, public transport is the most important way to access opportunities and essential services, from finding work to education and health care. Also, it is the providers of informal or semi-formal services, rather than the formal ones, who account for more than half of the trips in public transport in the region.

The term “informal” raises some concerns as it may lead to marginalizing the service, and, by association, its users. Depending on the context and the country, the term is synonymous with “illegal”, even though these services usually come to fill the gap in the market resulting from the government’s limited capacity. In fact, in the LAC region, informal transport has bloomed in all shapes and sizes, from the Diablo Rojo buses in Panama to the Lotação vans in Brazil.

Inserting these services into the formal transport system has been a public policy issue for a long time for city-level authorities, and has resulted in different approaches.

Distributing the COVID-19 vaccine is one the largest logistic challenges in history. The level of complexity can only be compared to its very development. While many of the LAC countries are still waiting for the vaccine, the distribution plan design should consider and include the experience of the right and wrong decisions made by the countries that are ahead.

Since the final development stages of Pfizer’s vaccine and its first application at Coventry University Hospital in the UK last December 8, 2020, countries have had a hard time to implement logistic plans to distribute the vaccine across their own territory. How big this challenge is depends mainly on the country’s geographical complexity, its population size, the quality of the cold storage distribution chain, and the clarity and effectiveness of the logistic plan designed by the authorities. Even among the best performers in this titanic task, flexible, swift decision making has been key to progressing in the face of multiple contingencies rising along the way. 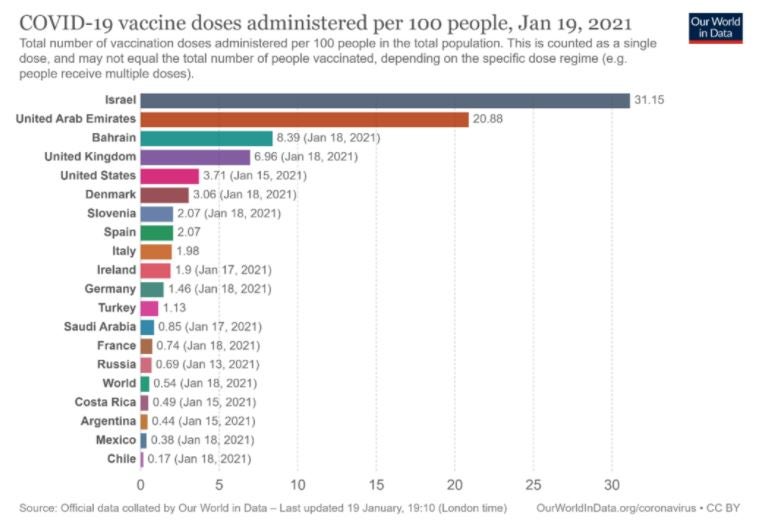 In LAC, the first vaccine was given in Mexico on December 24, 2020. That day Costa Rica and Chile also launched their vaccination campaigns, whereas Argentina kicked off on December 29 with the Sputnik V vaccine. LAC have focused their efforts on gaining access to the vaccines and establishing delivery dates from the manufacturers’ facilities. The experience of the countries that are leading the vaccination process suggests it is necessary to have accurate logistic plans.