We present three selected IDB Group blog entries, on strengthening the resilience of the social infrastructure of the Caribbean, the energy sector and the pandemic's effects on inequality in the region.
Idb Invest Team
OCTOBER 08 2021

How to Think about Resilience in the Caribbean’s Social Infrastructure

Every year the Caribbean loses an average of 2% of its social infrastructure capital due to natural disasters. In the countries with the highest risk, such as Monserrat and the Bahamas, for example, each year approximately 5% of social capital is lost, which indicates that, at this rate, every 20 years these countries would be obliged to rebuild all their social infrastructure capital.

Figures like these show the magnitude of the challenge ahead, but where to start? A very important first step is the transfer of knowledge at the regional level, both in terms of risks and solution strategies. Sharing evidence and innovative solutions, in our opinion, is key. Below we explore this problem in the Caribbean.

The higher frequency and intensity of these storms in the region means there is less time for recovery between events. In 2019, for example, Dorian became the most powerful Atlantic hurricane on record to have directly impacted a landmass.

Eighteen million people do not have access to electricity in Latin America and the Caribbean. In the year 2030, there should not be a single citizen of the region without electricity. This figure is equivalent to the population of Nicaragua, Costa Rica, and Honduras, or close to the total population of Ecuador.

18 million people do not have access to electricity at night and cannot keep their food refrigerated, or can access other services. The region, however, has made significant progress in the last decade to increase the rate of electrification.

According to data published in the Energy Hub, the region increased its coverage from 52% in 1970 to 97.2% in 2019. This achievement has undoubtedly transformed the lives of the region's inhabitants. As a result, Latin America and the Caribbean has become one of the regions with the highest electricity coverage in the world. 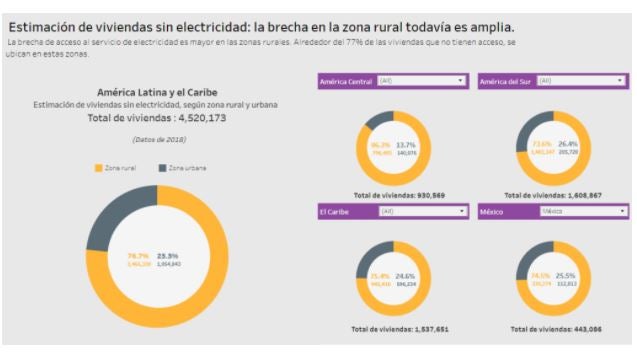 The Pandemic Is Increasing Inequality in Latin America

Inequality in Latin America has increased during the pandemic. That is our conclusion in a forthcoming study in which we noted that 2020 saw a reverse in the trend toward poverty reduction and greater equality that started 20 years ago.

The study is based on data generated through employment and household surveys conducted over the past three decades. For 2020, information comes from 10 countries – accounting for approximately 75 percent of the population of the region – that serves as the basis for determining the most recent trends.

To our knowledge, this is the first study to produce results based on primary data collected by national statistics institutes during the pandemic.