Climate change is one of humanity’s most pressing challenges. There is wide consensus that human activity is its main cause. Every sector of the economy adds to greenhouse gas emissions, with energy, materials, transportation, agriculture, and forestry accounting for the bulk of the negative impact.

However, it’s not all bad news, since there are parts of the economy that can have a positive impact: for example, the telecom sector, through fifth-generation high-speed Internet connections (5G).

If the Paris Agreement goals of limiting temperature increases by 2050 to substantially below 2 degrees Celsius – and, if possible, below 1.5 degrees – are to be met, an enormous endeavor lies ahead. This will entail reductions in emissions at a scale not seen before. There is also consensus that such transformation will require a profound contribution from disruptive technologies. The World Economic Forum stated that digital technologies, if taken to scale, could cut emissions in the highest emitting economic sectors by 20% by 2050.

Clearly, the mobile industry can play an important role. Mobile phones are now ubiquitous and, according to The Economist, “they might be the most effective tool of development in existence”. Championed by GSMA, global organization unifying the mobile ecosystem, the sector was a leader in committing to the UN’s Sustainable Development Goals (SDGs). And in 2019, GSMA’s Board put the lens on SDG 13 (Climate Change) and on behalf of the industry by set the target to achieve net zero carbon emissions by 2050.

Now, the industry is fully embarked on the rollout of 5G, an exponential technology which is at the frontline of digitalization. This opens an enormous opportunity to positively impact climate change.

What is 5G and how can it help?

5G is the latest standard for broadband cellular networks. Compared to 4G, it promises to be 100x faster, with latency as low as 1 millisecond, and improved spectrum efficiency. This quantum leap in the quality of mobile broadband services will also unleash the full potential of the Internet-of-Things (IOT). IOT permits all kinds of sensors and devices to connect to the internet. Examples of 5G and IOT-enabled solutions that benefit climate change are plentiful. They crosscut all economic and human activity.

For example, 5G will allow more people to work and access information and entertainment remotely, which will reduce emissions from cars and planes. The transportation sector will also be positively impacted by self-driving cars and trucks. According to Qualcomm Technologies, “connecting vehicles to their surroundings – such as to other vehicles, infrastructure and pedestrians – could save anywhere between 15-20% in carbon emissions.” The prevention of accidents can also reduce traffic by 25%. Live traffic updates and real-time sequencing of traffic lights will reduce commuting times and cars on the roads. 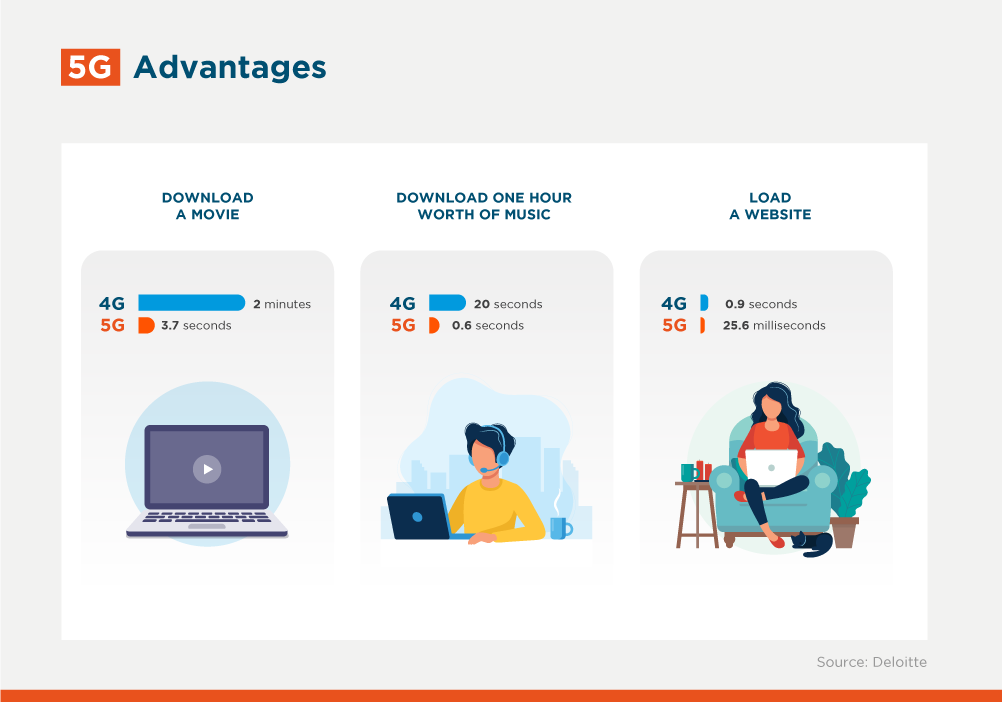 Buildings will significantly reduce their energy use, with devices that can power up or down automatically, adjusting temperatures and controlling lights in an efficient manner. Utilities can detect leaks of gas, water and sewage.

5G / IOT connected devices already provide real time data to farmers, contributing to precision agriculture and a more climate-friendly use of inputs. Crops can be harvested at the optimal time and food waste can be reduced. And of course, the positive impact on climate change is exponential when connectivity is coupled with other technologies such as AI and cloud computing. In Costa Rica, non-profits are fighting illegal deforestation through a combination of 5G and Artificial Intelligence.

With 5G we should also expect a proliferation of private networks. In Brazil, food manufacturer Nestlé is building a first private 5G-standalone network on its premises. This Industry 4.0 initiative is a move towards the autonomous factory model. Greater optimization and innovation, leads to productivity and efficiency, including in the use of resources which benefits the environment.

5G also has its critics…

Some NGOs wonder whether 5G costs and externalities -mainly in terms of energy consumption- outstrip its benefits. More hardware and devices also require mining of rare metals and while also increasing e-waste. As the number of people and connected devices increases data usage exponentially, so does energy consumption, although on a per-unit-of-data basis 5G-related emissions will reduce drastically, by at least 90%.

Industry participants are carrying out multiple sustainability strategies, ranging from recycling of toxic materials and e-waste to the use of green energy solutions. In Latin America, by 2025 TIM aims to cover 90% of its energy requirements through renewable sources, while Telefonica aims to use 100% renewable energy across its regional operations by 2030. Infrastructure sharing also contributes to lower emissions. Passive infrastructure sharing is common, and increasingly more active elements on networks are being shared, as in the case of Internet para Todos in Peru, an IDB Invest equity portfolio company.

Unfortunately, the deployment of 5G in Latin America and the Caribbean lags other regions. 5G connections in the region are expected to reach 86 million by 2025, considerably below the expected 267 million in North America, 893 million in China and 276 million in Europe, according to GSMA. In terms of IOT, the region anticipates 1.2 billion connected devices by 2025, compared to 24 billion globally.

Connectivity and Climate Change: the need for a concerted effort

As stated by MIT Technology Review, “Broadband cellular connectivity is a uniquely powerful enabler for decarbonization transformation levers, including efficiency and optimization, analytics and insight, and new pathways for disruptions”. 5G can facilitate the transition to a more sustainable, greener and lower carbon future. Not only do mobile communications contribute to all 17 SDGs, but they also play a key role in climate mitigation and adaptation strategies.

Tackling climate change is multifaceted mission. It will require a concerted effort by all stakeholders from both public and private sectors. In this, 5G will have a clear convening role.