It comes down to this: the only way to recover from the pandemic is through sustainable development. Thematic bonds can be green, social or sustainable (a combination of green and social projects).
Carole Sanz-Paris
Gema Sacristán
NOVEMBER 02 2020

It comes down to this: the only way to recover from the pandemic is through sustainable development. To make that work, we need to facilitate financing flows that generate, in addition to financial returns, measurable impacts on social and environmental development. And capital markets are a vital source for such resources, specifically through instruments such as thematic bonds.

These bonds can be green, social or sustainable (a combination of green and social projects). Their main characteristic is that the funds raised are directed to finance the Sustainable Development Goals (SDGs) of the 2030 Agenda and the Paris Agenda, and are also aligned with international standards, such as those of the International Association of Capital Markets (ICMA), which include transparency requirements regarding the use of funds.

Under this model, so-called “COVID-19 bonds” emerged in the first quarter of the year, in order to finance projects that mitigate their impacts, from equipping health centers to facilitating liquidity for small and medium-sized companies. If we estimate social and sustainable “COVID-19 bonds” under ICMA standards, between January and May more than $19 billion were issued globally, according to S&P Global. The figure rises to $150 billion if we include those that did not follow international standards, according to BMO Research.

Development finance institutions (DFIs), including the IDB and IDB Invest, have been leading these issues, which have proven to be very popular with investors, with over-demand ratios of up to seven times the amounts offered .

The urgency of having a strong financial response to the crisis, with instruments that guarantee measurable impacts, has increased the relevance of the “social” component of thematic bonds. Only in the first half of 2020, the issuance of social bonds has been almost triple that recorded in all of 2019, according to data compiled by Refinitiv. Similarly, the issuance of sustainable bonds is already 30% higher than in 2019. 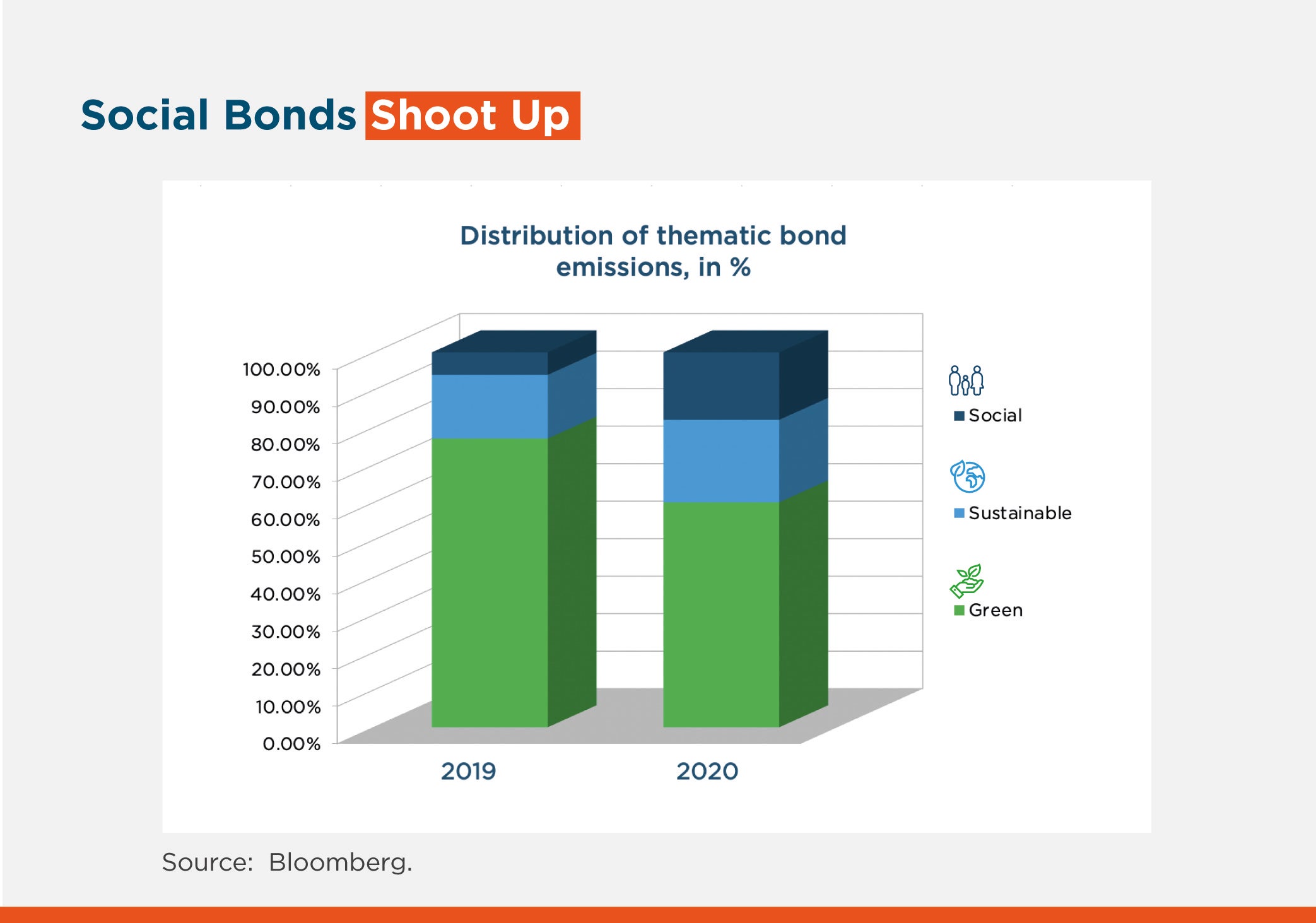 It was precisely in this context that ICMA updated its Guide to Social Bonds, to include new social segments to be considered as beneficiaries, many of them severely affected by the virus, and new categories of projects. This includes aid for unemployment resulting from socio-economic crises and support for health and food security systems.

In the region, governments were first to issue sovereign bonds to fund their pandemic relief programs. Even though they didn't necessarily follow ICMA standards for social or sustainable bonds, they have also seen high demand. From January to July, ten governments have issued sovereign bonds for about $ 25 billion.

The path initiated by sovereign issuers and DFIs encourages investors' interest in this type of instrument. With an extraordinary appetite such as the one observed, the ideal conditions are being created for private issuers to access these sources of financing in the region. That said, the issue of thematic bonds requires discipline in the application and monitoring of international standards, for a social bond to be recognized as such. Investors, particularly institutional investors, are looking for issuers that follow best practices and deliver on their promises to use funds.

In the private sector, several international companies have joined the trend. In March, Pfizer issued a sustainable bond worth $1.25 billion, aimed at contributing to the SDGs in environment and health, which includes reducing its own environmental impact on the manufacture of vaccines and ensuring access of vulnerable populations to a future vaccine against COVID -19. In May, Bank of America was the first U.S. lender to issue a $1 billion social bond, aimed at funding loans for non-profit hospitals, homes for the elderly, and manufacturers of protective medical equipment.

In the region, the private sector is beginning to follow this same strategy in local capital markets. In June, Colombian bank La Hipotecaria was the first private entity to issue a social bond in local currency equivalent to $15 million, with a COVID-19 component. Said issuance will allow expanding access to social housing in the country, as part of a broad government policy in this sector, while 5% of the funds may be used to support the mortgage loan portfolio of its clients affected by the pandemic.

In August, another Colombian bank, Davivienda, issued the world's first gender social bond with incentives linked to objectives, aligned with international standards. The beneficiaries of this issue will be SMEs led and owned by women, as well as women buyers of social housing. In September it was followed by the ABC bank, in Brazil, which issued the country's first social bond aligned with the ICMA parameters, for an amount equivalent to $100 million. The beneficiaries, in this case, will be medium-sized companies from the less-favored regions of the country, as well as companies in the health sector.

In all three cases, IDB Invest structured these bonds and invested in them. To date, we have supported several companies issuing thematic bonds worth about $1 billion. Since we began to provide this support, we do so with the aim of contributing to the growth of this new class of assets in the region, and the vision that it will be key to transforming our economies.

Despite existing barriers and difficulties, Latin America and the Caribbean currently has a deeper local bond market than 10 years ago. We must avoid another lost decade for the region, and companies are faced with the unique opportunity to adopt sustainable practices and thus attract capital aligned with their values. This will help guide their countries towards the sustainable and inclusive development they need and deserve.