IDB World: The Enigma of Informal Work during the Pandemic, Desalination & Value Chains

A crisis like no other: Why informal work did not spike under COVID-19

Before Peru was struck by COVID-19, Diana Quispe* was a part-time hairdresser based in the outskirts of Lima, who served customers in their homes in one of the city’s wealthier districts. She was an informal sector worker, like almost 80% of workers in Peru and over 50% across Latin America, with no health insurance or paid sick leave.

But when the government announced strict lockdown measures at the onset of the pandemic it was clear that her job —which required close contact with customers— was not going to be viable for some time. It was the case for many workers in personal services who make up a large part of the informal sector.

As an informal worker and the mother of three, Diana Quispe had to make a difficult decision: either look for another informal job and disregard the authorities looking to sanction those who evaded lockdown, or rely on her partner’s income as a primary-school teacher. As her 7-year old boy started online schooling and she became afraid of exposing her mother to the virus from looking after her two toddlers, like many women in her position, she made the tough decision to stay home and care for her children, instead of looking for another job.

Desalination: the future of water?

Did you know that oceans, lakes, seas and other open bodies of water could one day become the most important sources of freshwater? Desalination technologies offer a bright path ahead

Having a safe and quality water supply is essential for the socioeconomic well-being of today and tomorrow. Technological innovations that provide quality drinking water are essential for regional growth, economic success, and peace.

With over 18,000 plants in over 150 countries around the world, desalination is becoming a major source of potable water. Over 300 million people depend on these plants for municipal, industrial, and agricultural purposes. Currently, about half of all desalinated water is produced in the Middle East and North Africa.

In recent years, Latin America and the Caribbean (LAC) has become one of the biggest emerging markets for desalination. As of 2020, the continent hosts 30 plants and plans to invest more than USD 25 million in future projects. Chile, which already has 18 plants, intends to build Latin America’s biggest solar-powered desalination plant in the Atacama Desert to meet its mining and municipal water demands. Peru uses the water from its five plants for agricultural, industrial, and municipal needs. Other plants exist in Mexico (5), Colombia (2), and Argentina (1). 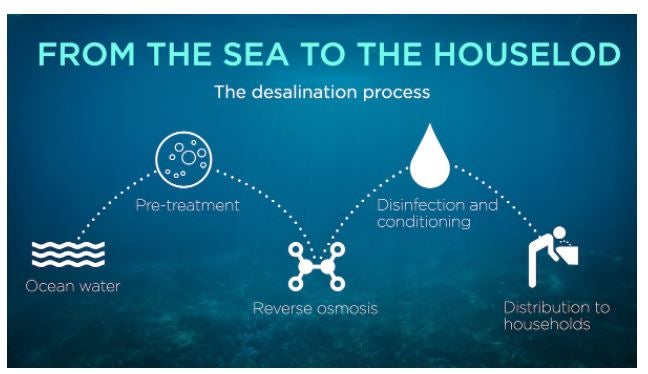 Boosting Trade in a Postpandemic World

Global value chains (GVCs) are essential to modern trade. Given the separation of production into several stages, carried out in different countries, GVCs allow nations to increase productivity through specialization. Yet Latin America and the Caribbean’s participation in GVCs remains low (18%) compared to Asia (28%) and Europe (34%).

The paradox of the COVID-19 crisis, with its lockdowns and production disruptions, is that it has taken a huge toll on trade while providing Latin America and the Caribbean with new opportunities to increase its participation in GVCs. As companies around the world seek protection from disruptions by diversifying their supplier base, companies operating in the region could benefit by complementing or replacing some of foreign companies’ pre-COVID suppliers. The COVID-19 crisis could also represent an opportunity for the region and its exporters to increase their resilience to disruptions by deepening regional trade integration.

The question is what makes greater resilience and deeper participation in GVCs possible. To answer that question, the chapter on trade in the 2021 IDB Macroeconomic Report evaluates the performance of the region’s exporters during the COVID-19 pandemic. Understanding the characteristics behind firms’ performance allow us to draw policy implications that may be helpful in shaping the region’s economic recovery.