The Silver Economy: from Inclusive Responsibility to Thriving Business

Through the "silver economy", senior citizens are a source of business for the private sector. Financial inclusion of this growing population segment will create opportunities throughout the region.
Cristina Paredes
Terence Gallagher
FEBRUARY 23 2022

The pandemic has brought to light the fact that senior citizens in Latin America and the Caribbean (LAC) were the most exposed to COVID-19 and at the same time have had the most difficulty adapting to the increasing digitalization imposed by lockdowns. It's time for this segment to be seen as an opportunity rather than a cost.

We have all been children, and we have all thought about the challenges we will face as we get  older. As time goes by, seniors have reached an age where technology starts being not an advantage but a barrier: we need only look at the queues in front of any bank branch, often consisting of seniors trying to use the bank's digital interface, or even lacking a proper Internet connection to access it.

Private entrepreneurs see this, as they see any other problem, and what they perceive is a business opportunity. And it's a growing business. The UN estimates that most countries in the region have an annual population growth rate between 0% and 1%, similar to that of many countries in wealthier regions. However, the number of people aged above 65 in the region will rise from 56.4 million in 2019 to more than 144 million in 2050.

While in the midst of the pandemic it seems appropriate to talk about health and hospitals, it is also very important to start thinking about the future: this segment of the population needs financial products, financial aid and education, and access to technology and digitization.

A recent report published by Centro Universidad Católica de Chile in collaboration with the IDB Group highlights the needs of seniors. Based on discussions with more than 8,000 Chileans, the report concludes that the perception of uncertainty is key in the population at large and increases with age. As we get older, this uncertainty is reflected in the fragility with which the future of institutions such as education, services such as pensions and even the environment itself is perceived.

However, in contrast to these feelings, there is also evidence of hope, mainly associated with a decrease in uncertainty, which implies a desire for institutions to contribute to generating certainty in people's lives. This is a key finding and is the very basis of the so-called "silver economy", which describes all the buying and selling of goods and services for older adults.

We are in the 21st century, and longevity can be more productive than in the past. Today's seniors, for example, are more likely to continue working, studying, and consuming, are in better physical shape than seniors from other decades; they have more energy to enjoy life and keep contributing to society. There are different consumption and behavior patterns, and this will keep on evolving.

Developing services and products for seniors is key. A recent study by the IDB Group (in English here) highlights that companies and institutions in the region that are players in the silver economy are still too focused on healthcare (many are hospitals, nursing homes, pharmaceuticals, among others) while stakeholders’ role in active consumption (tourism, entertainment, education, housing) or in the investment and labor market is still very small. 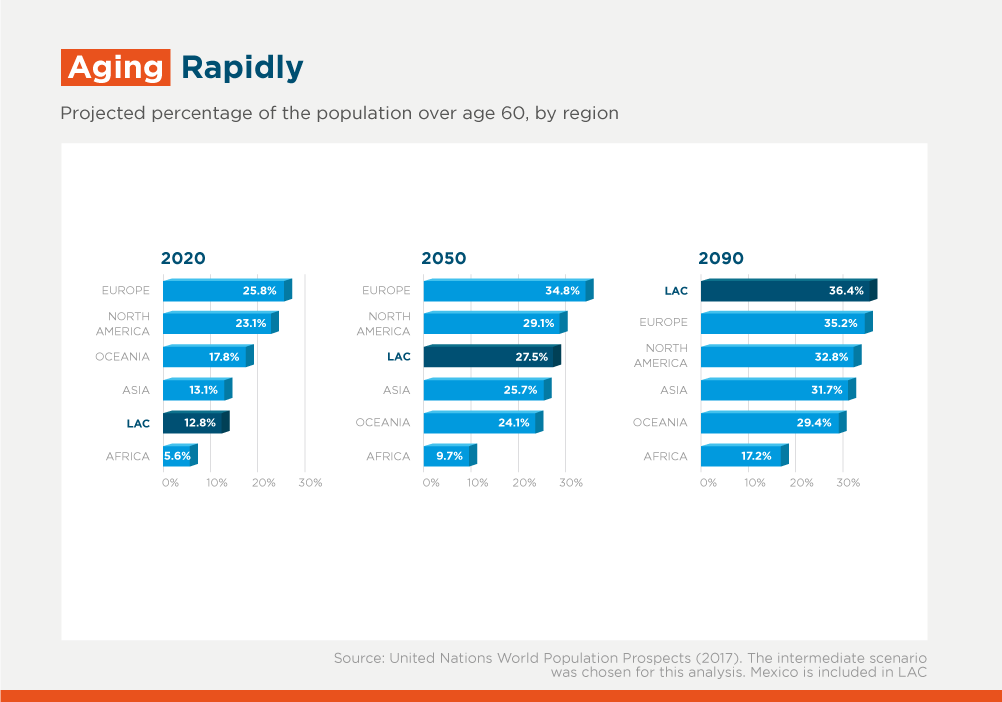 The report concludes that there is probably a potential demand for services that is not yet being met by a sufficient supply. Assisting the private sector in finding these new opportunities is the real challenge.

The idea is for more players to emerge, such as Caja Los Héroes de Chile, a pioneering institution that has more than one million customers, with a strong focus on pensioners (senior citizens) and 66% of the social credit portfolio aimed at this segment. IDB Invest backed Caja Los Héroes with funds and support to promote financial education among senior citizens. Similar support has been offered to other financial institutions that have focused on the silver economy, such as Caja 18 and Brazil's Banco PAN.

In Japan, the silver economy market is estimated to have exceeded $1.1 trillion, a figure that has doubled in 20 years and now accounts for almost half of all consumption in the country. In LAC, which is aging rapidly, the silver economy could play the part of an economic powerhouse. By 2050, more than one in four people (27.5%) are expected to be over 60 years of age. And by 2090, LAC will be the region with the highest percentage of adults aged 60 and over in the world, with more than 36%, according to UN estimates.

It' s time for the region to leave ageism behind and have a more open and positive view of aging and senior issues. We support the financial inclusion of the most vulnerable groups in this client segment through IDB Invest's investments to ensure that they can continue to make their contribution to the region's economy.

Cristina is an Investment Officer, Financial Institutions at IDB Invest, which she joined in 2005. She is responsible for originating and structuring