Women, Drivers of the Energy Transition

There is a significant call for more female representation at the top levels of energy companies. But it's not just a matter of adding to equalize shares. It's about ensuring that the female perspective is present throughout the energy sector's value chain.
Gema Sacristán
Patricia Tatto
NOVEMBER 11 2021

Climate change has made it clear that we must transform our energy model as soon as possible to reduce our dependence on carbon and thus slow down global warming. This process requires the effort of all economic agents, for which we have new technologies to develop more connected, efficient, reliable and clean electricity systems. Many of you would stop here. But that would not solve the challenge we're facing. We need to include one more piece in the puzzle: the gender perspective. Let's see why.

It’s not easy to see the relationship at first. And that often causes the issue to arouse some misgivings. But the relationship between energy transition and gender perspective is much more powerful and important than it appears at first glance. What's more, in order to succeed, the process of decarbonizing economies must include women's participation, experiences and voices. Why? Because women are disproportionately affected by climate change and have valuable knowledge and practical experiences to contribute to societal resilience. And because men and women have different access to, needs for and uses of energy. The failure to acknowledge and integrate these differences means leaving out half of the world's population and disregarding a non-negligible part of the energy pie: that corresponding to women's participation as energy providers and consumers.

Women are important energy consumers, due to their traditional role in household chores and in the agri-food sector, especially in developing countries, but also due to the consumption of innovative solutions in a professional environment and in the world of entrepreneurship. Our role as energy suppliers is less than we would like because of the difficulties women face in accessing financing and innovation. On equal terms and with the same facilities, women would be important energy providers, as shown by the many initiatives developed in emerging countries in households with no access to electricity.

The development of renewable energy sources in Latin America and the Caribbean, including solar, wind, geothermal and biomass, has enormous potential to drastically improve the lives of women in rural areas, preventing them from having to travel to collect water or fuel for cooking or limiting their activity to daylight hours. A stable energy supply is a major catalyst for enhancing economic development, providing electricity for production machinery, agricultural processing, water pumps, telecommunications... but also to provide basic education and health care services.

That said, the analysis of the current share of women in the energy sector is rather discouraging: they account for barely 16% of the seats on the boards of directors of large international electricity companies and, at the current rate, it would take 72 years to reach 40%, according to data from the consultancy firm EY. At the workforce level, it is estimated that women represent less than 20% of the energy sector workforce. 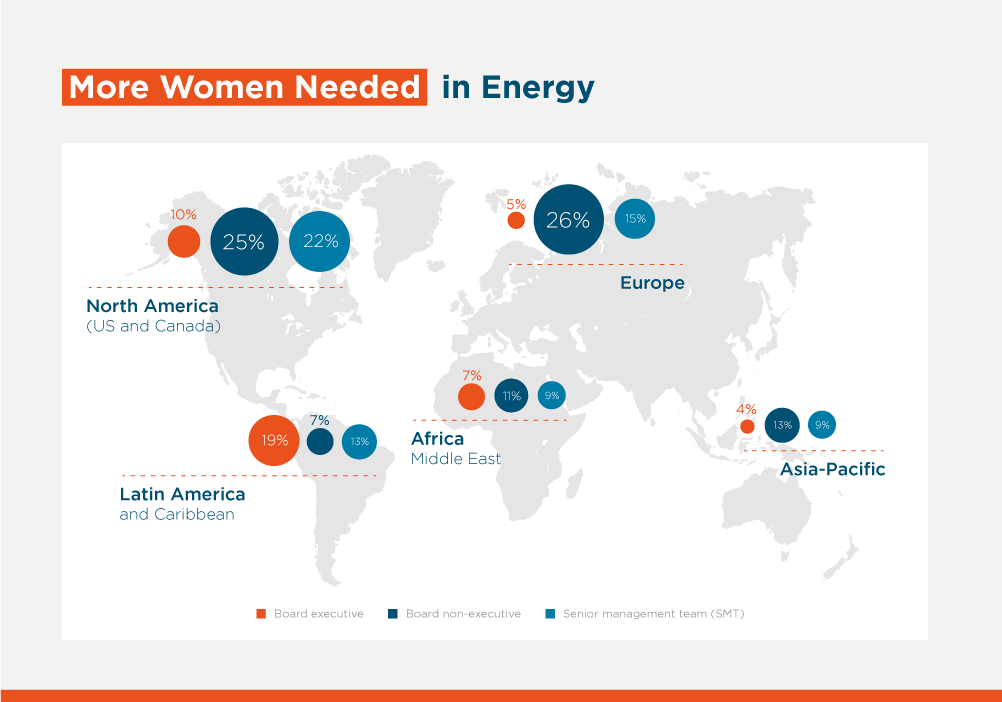 More female representation at the top levels of energy companies is an important call to action because power and influence in the corporate world is still very vertical. But it's not just a matter of adding to equalize shares. It's about ensuring that the female perspective is present throughout the energy sector's value chain.

Let's use women's skills and abilities and their special sensitivity to the sustainable revolution. Yes, we have that sensitivity; it is not a gratuitous statement. Women account for 35% of the workforce of the world's leading renewable energy companies, a percentage that far exceeds their representation among traditional energy companies, according to data from the International Renewable Energy Agency (IRENA), as reported by the Women in sustainable energy, climate change, and environmental protection organization (WISE).

The same study cites the example of two of the major international oil companies, Royal Dutch Shell and BP, which have set significantly more aggressive decarbonization targets than their competitors and also distinguish themselves from the competition for having a higher representation of women on the board of directors (54% for Shell and 40% for BP). Data collected by BloombergNEF after analyzing 11,700 international companies in the Gender Diversity and Climate Innovation study corroborate that companies with greater gender diversity on their boards (30% or more) manage to better contain the growth of their carbon emissions (0.6%) than those without a female presence (3.5%). Coincidence, some would say. Well... we prefer to think that there is no such thing as coincidence. Everything happens for a reason.

Even climate change has its raison d'être if it is the wake-up call we all needed to get us moving in the right direction. Let' s use all our potential, both men and women, with our different perspectives and needs, to learn about reality with all its nuances and angles. Let us include the gender perspective in all aspects of the energy sector: in policies towards a fair and equitable energy transition, in projects, in concrete plans for the development of renewable energies, in energy efficiency initiatives, in actions against climate change, in environmental protection, in the circular economy and other related Sustainable Development Goals (SDGs).

This is the great double challenge we face: to simultaneously drive diversity and decarbonization. The first ingredient feeds and reinforces the second and, together, they will allow us to develop the innovative and inclusive solutions we need to address the transition to cleaner and more technologically advanced energy systems.

There you have it. By including the gender perspective, we’ve now perfectly identified all the pieces of the energy transition puzzle. Can you help us to fit them together?

Patricia is President and founder of Women in Renewable Energy Mexico AC, (MERM) a non-profit Civil Association in the renewable energy sector, with t