We present three selected IDB Group blog entries, on crime and public opinion in the region, transportation improvements in Peru’s Green Coast, and the promotion of innovation and entrepreneurship.
Equipo Bid Invest
JULY 14 2021

With 9% of the world’s population and 33% of its homicides, Latin America and the Caribbean suffers from far too much violence. But government responses, heavily focused on punitive practices like mass incarceration, have fallen short. While incarceration has increased by 76% over the last decade, the region as a whole still has more than twice the homicide rate as the world average and Central America’s rate stands at three times what it was 30 years ago.

Part of the problem lies in public preferences that favor quick fixes over more effective long-term policies. The IDB recently published a study and accompanying dataset, based on three different public opinion surveys, that illuminates citizen attitudes towards crime and policies to fight it. The hope is that understanding those preferences and their determinants can help to better address the problem and make crime fighting more effective.

One thing that stands out in the surveys is low trust in institutions and the ability of public officials to wisely spend tax money for long-term socially beneficial policies. This lack of trust conspires against the implementation of effective solutions. People who mistrust the police—and there are many—are less likely to support boosting taxes to increase police budgets. They doubt that greater resources for training and equipment will improve crime-fighting abilities. Indeed, more than 30% of Latin Americans would rather put money towards defending themselves than rely on the police. Distrust in politicians also takes its toll. It makes it difficult to craft crime-fighting strategies with the right balance of prevention and evidence-based deterrence policies.

Lima, Peru’s capital, has a privileged location as it is one of the few cities in the world to be a coastal capital. The so-called Costa Verde (”Green Coast”) Beach Circuit is a highway that connects the coastal districts of Callao, Peru's main port, with the districts of San Miguel, Magdalena, San Isidro, Miraflores and Chorrillos. The highway is in the lower area of ​​a large cliff and is the only road that is on the shores of the Pacific Ocean.

Although this highway, better known as "the Green Coast", was conceived as a high-speed road, Lima's need for public space has led to this space being of great importance for the capital and the province of Callao. The improvement and inclusion projects in this area could have an even better impact considering basic concepts within the need to have smart, sustainable and environmentally friendly cities. In the last decade, some "improvements" have been made so that this route is not only designed for motorized vehicles, but also promotes other forms of mobility. However, more favorable implementations could still be made to the inclusion of other modes of transport and make the Costa Verde a truly greener transit area.

In picture 2 of the infographic, some improvement proposals are presented in a section of the Costa Verde, so that it is more friendly to the environment, safe, inclusive and pleasant; in other words, so that it becomes a symbol of sustainability of which all Peruvians are proud. 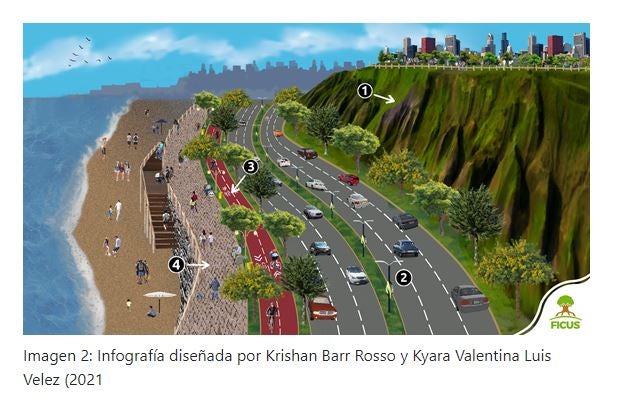 Fostering Innovation and Entrepreneurship in Latin America and the Caribbean

Latin America and the Caribbean suffers from low productivity. The slow growth in productivity per worker in the region has weakened its economies and made countries unable to satisfy the burgeoning needs and demands of their citizens. The Covid-19 pandemic has only highlighted this chronic problem, revealing a significant technological gap between the region and the advanced economies.

One of the most urgent challenges for the region is thus to strengthen and energize innovation research, development, transfer, and implementation ecosystems to accelerate productivity. The region must provide adequate government support. It must create an environment in which innovation can flourish and high quality start-ups can attract investors and help boost growth — an  issue discussed at a recent IDB conference  which brought together academics, researchers, regulators and practitioners.

Understanding the modern innovation ecosystem is key to fostering productivity in Latin America and the Caribbean. Traditionally, innovation was “closed”. Big corporations were the main actors, generating ideas, developing and executing them and monetizing them in their own markets. This was  expensive and exclusive, and few firms could afford to innovate. Indeed, because many firms could not profit from their innovations, new ideas often languished.