A strong public and private commitment with the more than 800 indigenous groups in Latin America & the Caribbean is needed to boost their contribution to economic development. Better and more investment in indigenous territories is a must, as part of an approach based on development with identity that increases the efficiency and impact of such investment.
Carmen Albertos
Stephanie Oueda
AUGUST 20 2020

In the discussion about the contribution of Latin America and the Caribbean’s (LAC) indigenous peoples to the recovery from the COVID-19 pandemic, more weight should be given to boosting their role in the economy, and to highlighting the value of their natural, cultural and social heritages.

Around half of the indigenous population of LAC lives in cities while keeping ties with their original communities. However, due to the segmentation in the labor market, and the scarcity of culturally-relevant public policies, their impact on economic activity is lower than in developed countries such as Canada, Australia and New Zealand: in the latter, for example, recent estimates are that indigenous-owned companies (mostly Maori) account for up to 8% of the country's gross domestic product, well above comparative figures in LAC.

Having overcome the traditional inclusive approach, the IDB group promotes development with identity: the preservation of the characteristics of indigenous peoples while maximizing their potential to contribute to recover from the crisis, one of the key themes of the International Day of the World's Indigenous Peoples last Sunday.

The private sector must see the opportunity that exists in communities that – along with women, Afro-descendants, LGBTQ + and people with disabilities – are below the region's average in almost all labor and productivity statistics. The public sector, meanwhile, must help create opportunities for indigenous businesses and lower their access barriers to financing. This is the case of Australia and Canada, which have public procurement policies and national strategies promoting the development of the indigenous business sector.

This is evident in the employment statistics compiled by the International Labor Organization, which show that the percentage of formally-employed indigenous people in LAC is far lower than in other regions, such as North America. Also, the pay gap between indigenous and non-indigenous people in Latin America and the Caribbean is higher than anywhere else in the world, at 31.2% on average, compared to 7.9% in North America, the result of multiples issues. 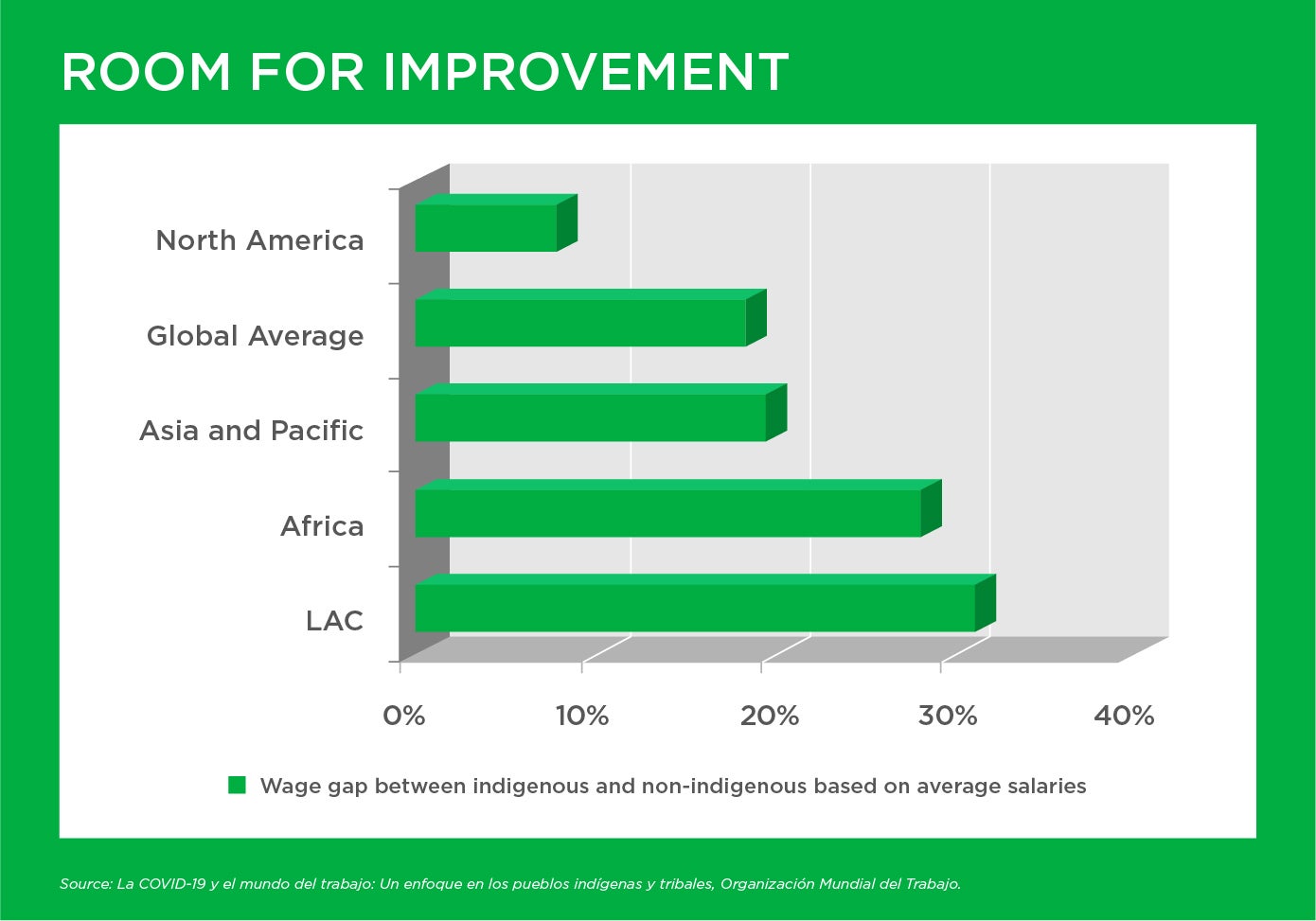 Still, there have been advances in recent years. In Panama, the IDB approved a $40 million loan last year for a program that will grant lines of credit to nearly 1,400 indigenous entrepreneurs and creates specific instruments for access to financing and indigenous business development.

In Ecuador, IDB Invest has been involved in two projects, Tiendas TIA and DesdelSur, which collaborate with indigenous businesses that are already part of the supply chain and seek to expand their operations and generate jobs nationwide. TIA received a loan of $40 million, while that for DesdelSur is worth $30 million.

The International Day of the World's Indigenous Peoples is an opportunity to reflect on how the private sector can increase its own potential – through arrangements and alliances that meet market demands, as well as abide by basic cultural considerations – to grow its business and contribute to the expansion of regional economies.■