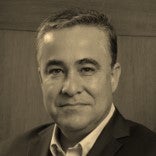 Claudio Muñoz was born in 1963. He is Chilean and Spanish, married with Magdalena and father of 3 children. He is an Industrial Civil Engineer from the University of Chile.

Claudio joined Telefónica in October 1986 (at that time, Chile Telephone Company) as an analyst in the finance area. He developed his professional career for more than thirty years in Telefónica Group, holding positions of Vice President of Management and CEO. In 2005 he settled with his family in Spain and assumed responsibility for the Telefónica's Division to manage corporate clients in America and responsible for the Group's Wholesale Division Worldwide; in 2010 he returned to Chile as Chairman of Telefónica Board of Directors.

In 2018 he became Director of Aguas Andinas, a leading Chilean water and environmental service provider and was appointed Chairman of the company's Board of Directors in 2019. Claudio is also Chairman of Corona SA and member of IDDC (Institute of Board Directors of Chile)

Claudio Muñoz is academic at the Universidad del Desarrollo and President of the University's Center for Digital Transformation, he is also President of Chapter Zero Chile, an initiative for action against climate change. He is Past President of ICARE and member of the board of Foundation La Protectora de la Infancia.