Closing the Dream Gap: the Key to an Inclusive & Equitable Education

Girls and boys begin to classify jobs according to gender at the age of six. At the age of 12, about 50% of girls aspire only to stereotypically feminine roles – this is the “dream gap.”
Gema Sacristán
JANUARY 24 2023

In order to guarantee an inclusive and equitable education, all kinds of biases must be eliminated from the classroom. We are not talking about mixed schools, but about curricula allowing both boys and girls to enhance their dreams, so they can think of themselves as studying or working anywhere, thus promoting equality from the base.

What do you want to be when you grow up? We were all asked this when we were kids. Children's ability to see themselves developing one career or another arises from external stimuli, the examples they can see at home, in the classroom, and in media and entertainment.

When I went to school, among the prominent figures there were very few women to look up to. There were no subjects with a gender perspective, much less classes on women in history or economics, as it is the case now, sometimes. Imagining yourself in the absence of role models is difficult. In fact, it's the most dangerous gap of all, because it restricts our ability to dream.

Many studies show that girls and boys begin to classify jobs according to gender at the age of six. Furthermore, when girls reach the age of 12, about 50% of them begin to aspire only to stereotypically feminine roles. This is the dream gap.

Closing the dream gap is key not only for girls and boys, but also to promote sustainable, inclusive and equitable growth in Latin America and the Caribbean (LAC). For this reason, it is necessary that through education we help boys and girls to be able to dream without limits on their potential. To the extent that schools include role models for all girls and boys, regardless of their gender, origin, ethnicity or religion, it will be possible to begin to achieve equality from the ground up.

In the entertainment industry, some efforts have already been made. The inclusion of more female superheroes, from different backgrounds and with different ethnicities, allows girls to see themselves in roles that go beyond damsels in distress. The task, however, does not end there, and we must all contribute to closing the dream gap.

Today, investment in social infrastructure, such as schools and other establishments, is vital not only for development but also for the reactivation and recovery of economies. More than a third of the girls and boys in LAC attend poorly equipped schools, which also limits their development. 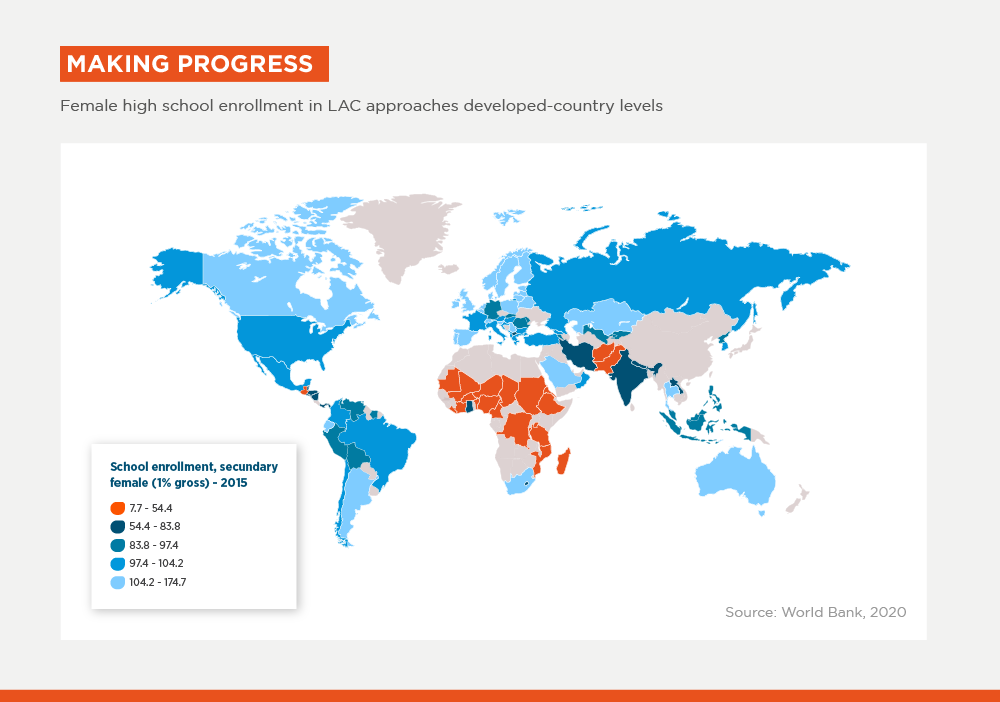 For this reason, some companies have already begun to work on closing the dream gap. Mattel was a pioneer with the “Barbie Dream Gap Project,” seeking to publicize women leaders who would motivate girls to become all kinds of things, from astronauts to web developers. To achieve this, the company created a collection of dolls inspired by heroines from around the world, which included women such as the Peruvian Mariana Costa, founder of the NGO to train women in technology Laboratoria; the Brazilian Doctor Jaqueline Goes de Jesús, who led the genetic sequencing of the coronavirus in her country; and the Mexican Adriana Azuara, founder of the All4Spas company and a wellness leader in the region.

Having role models that are similar to one is essential, not only to see them but also as examples proving that one can follow a certain path. The problem is when there are no references, either with stories or with similar characteristics to us. This automatically makes dreams seem more distant, which is why it is also important that education generates closeness with positive role models for girls.

Studies say that 90% of girls feel they have higher personal and professional aspirations after following inspiring women on social media. This was the driver for Inspiring Girls, a global organization that began in the United Kingdom and today is present in more than 30 countries, including some in Latin America, with the aim of helping girls connect with women who can be their role models, so they develop their full potential.

Helping to dream not only allows them to be inspired by positive role models, but also prevents them from falling into cycles of poverty, violence, and even adolescent motherhood. For this reason, Fundación Tropicalia developed the initiative "I am a girl, I am important", through which it carries out various actions aimed at girls, their families and communities in the Dominican Republic. Among its programs there is a camp in which hundreds of girls live a unique experience of personal development and fun, where they feel empowered and safe to express exactly what they think and dream of.

In 2023, the premise for World Education Day is “invest in people, prioritize education”. A statement as simple as it is necessary, mainly due to the lag that existed before the pandemic and that got even worse after it. This declaration is also an opportunity to transform education from a gender perspective. This is the basis that will allow us to achieve sustainable development goal No. 4, aiming to guarantee inclusive, equitable, quality education that promotes learning. Only then can we create more inclusive societies. And what better if it also allows us to contribute so that the girls and boys of LAC can dream without limits.