Fighting Climate Change, One Project at a Time

At a time of global concern over unchecked climate change, Latin America and the Caribbean (LAC) is taking important steps on climate action, one project at a time.

The region is at the forefront of the renewable energy revolution, with the potential to do much more. With greater access to much-needed global capital, LAC can become the world’s leading renewable energy hub, taking advantage of natural resources such as ample sunlight and available land. As it stands, more than a quarter of primary energy in the region comes from renewables, twice the global average. From Costa Rica where renewable energy sources account for 99% of its electricity matrix to Brazil at 83%, countries small and large are increasingly powered by clean energy.

However, many countries in the region still depend on non-renewable energy. Bold and immediate action is needed for businesses and economies to leverage the transformative power of the private sector on the journey to net-zero in line with the Paris Agreement. In recent years, some countries have been taking action to diversify their national energy matrixes and increase the share of energy coming from non-conventional renewable energy (NCRE).

For instance, in 2015 Argentina approved a Renewable Energy Law, accompanied by a program (RenovAR) to promote the transition to a cleaner energy matrix through a set of long-term renewable energy auctions. It was estimated that between 2016 and 2025, the country needed $5 billion per year in public and private investment to improve energy generation, transmission, and distribution as well as to upgrade export infrastructure. 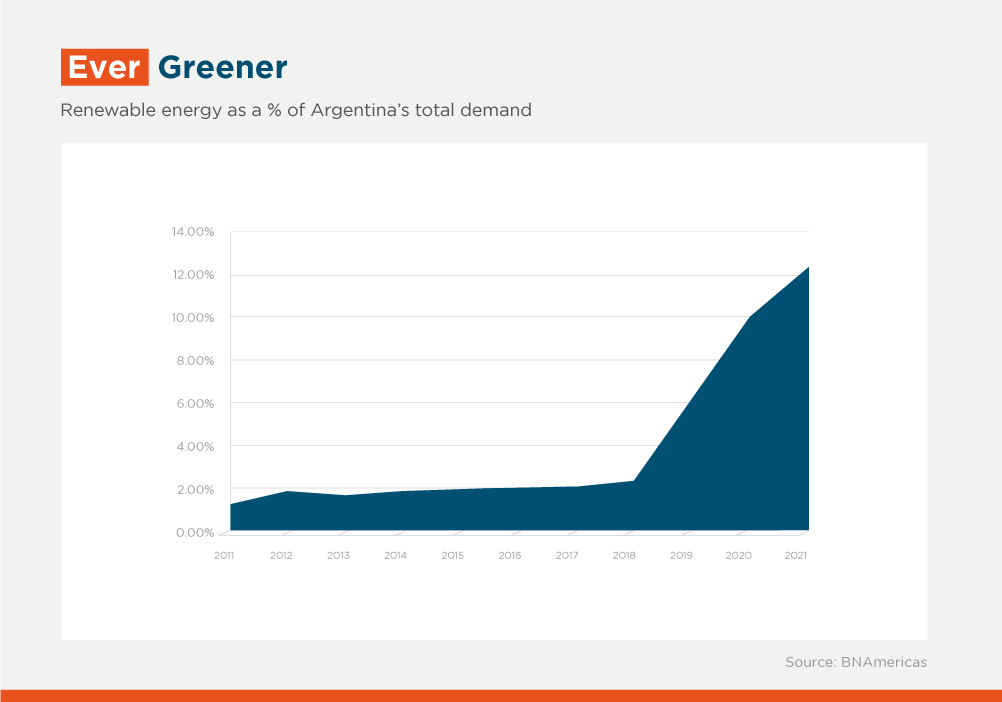 IDB Invest helped to finance many of the RenovAR-awarded projects, starting with a $20 million investment in Achiras, one of the first wind parks in Argentina, with 14 kilometers worth of transmission lines and 48 MW in installed capacity. This project is on track to displace 2.1 million tons of greenhouse gas emissions between 2018 and 2038 by producing approximately 200 GWh of renewable energy per year. This is equivalent to emissions from about 410,000 gas-powered cars driven for one year; in other words, over a quarter of the 1.5 million vehicles in the province of Cordoba alone, where the Achiras park is located. The investment is also significant because it contains a gender equity component, seeking to increase women’s employment in this male-dominated industry.

(For more on the impact achieved by Achiras, see this Client Impact DEBrief).

Also in Argentina, IDB Invest worked with Achiras’ sponsor, Central Puerto, in the construction of a 99 MW wind farm and its related facilities, including a 132 kV, 37-kilometre-long transmission line in the south of the province of Buenos Aires, allocating $36 million, which also had a similar gender equity component. IDB Invest also contributed $50 million to build and operate the PEBSA wind power park, which has 126 MW in installed capacity. This park is particularly symbolic given its location in Comodoro Rivadavia, a city on the Atlantic coast that has been a hub for the country’s petrochemical industry. In addition, IDB Invest financed $32 million for the El Corti 100 MW wind power project, located just northwest of Bahia Blanca in the province of Buenos Aires, Argentina’s economic powerhouse, and $9 million to the San Juan Solar Power Project with an installed capacity of 80MW located near the City of Las Flores, in the Province of San Juan.

As renewable energy output has expanded, so has the need for renewable energy storage capacity. This is perhaps the greatest challenge for an industry that is commonly the target of criticism when renewable sources, often plentiful and sufficient to fill the necessities of specific countries and regions, fail because of a lack of wind or sunlight, requiring typically fossil fuel-based power sources to cover the shortfall.

Take the case of Providencia Solar, the first commercial-scale solar power plant in El Salvador. In 2016, IDB Invest provided $57 million to finance this project operated by renewable energy leader Neoen. Over time it became clear that the plant needed to strengthen its capacity to store the excess solar energy it produced to ensure a stable supply to the country’s electric grid and avoid resorting to back up reserves from fossil fuel-powered plants to meet electricity demand. In 2021, IDB Invest stepped in with $4.4 million to finance a Battery Energy Storage System (BESS), allowing for energy to be stored and deployed more efficiently. IDB Invest also financed a BESS for Capella Solar, the country’s second-largest solar plant. Taken together, with a total power of 14 MW and a storage capacity of 10 MWh, these represent the largest group of energy storage batteries in Central America.

There is still much to be done to make the region’s clean energy transition a reality, but progress is being made, one project at a time.

(See these Client Impact DEBriefs for more on the impact achieved by Providencia Solar and Capella Solar).