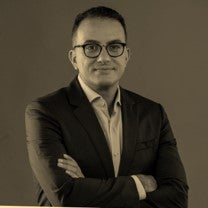 Eblein George Frangie, born December 2, 1977 in Paramaribo, Suriname is the CEO of Finabank, the 4th commercial bank in Suriname, since 2011. In 2010, Eblein was approached by the founder of Finabank, to help restructure Finabank, then a small family bank without a proper structure and growth direction. Eblein first started as Director Business Banking and after 6 months he was appointed as CEO of Finabank.

From the time he was named CEO, Eblein initiated a rigorous restructuring program of the bank. Finabank has experienced an average annual growth of 35% and is Suriname's 4th largest bank in terms of assets and the 2nd largest in terms of profits.

first Surinamese bank to publish in accordance with IFRS standards;

first and only bank in the IDB Invest Trade Finance Facilitation (TFFP) program;

first bank to introduce an Environmental, Social and Government policy.

Eblein served as board member of the Suriname Bankers Association from 2016 to June 2021, with the last 3 years as chairman. During his chairmanship, he worked with the board to establish the Suriname Credit Registration Bureau (CCBS), make Suriname's payments system fully electronic, the National Risk Assessment, the one- compliance program, consolidate the ATM network of banks in Suriname, and place financial inclusion on the Government's agenda.

In 2004 Eblein returned to Suriname after graduating in the Netherlands and worked for the second largest bank, Hakrinbank, where he held various positions such as commercial vice-head of the consumer department, account manager corporate banking and head of the MasterCard department.

In 2000, Eblein graduated from HES Rotterdam with a bachelor's degree in commercial economics and in 2004 from RSM Erasmus University with a master's degree in Business Administration with a major in Information Management. In addition, Eblein attended various executive management courses at the Stanford Graduate School of Business, Harvard Business School, INSEAD and IMD.